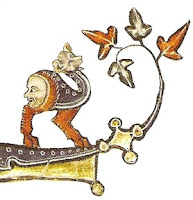 Psalters—books containing the Psalms from the Bible, usually decorated and illustrated—were common in the Middle Ages. They were intended for the private use of a family; a wealthy one, since the production of an illuminated psalter was expensive and time-consuming.


Sumptuous and exuberant, The Macclesfield Psalter is 252 small pages of densely illustrated text. Real discoveries of treasures are exceptionally rare. The Macclesfield Psalter is a jewel of manuscript painting. Its pages offer a view of the medieval world and the beliefs, prejudices, follies, aspirations and sentiments of its people. Doctors, priests, minstrels, mummers, farmers, dancers, tricksters and beggars mingle in the margins as they would have done on the streets of a busy town. A delight to the eye and a challenge to the intellect. The pictor shows a gift for blending the mundane with the absurd. Animals act as humans. Humans and animals interact in impossible ways. Fantastic beasts confront factual ones. 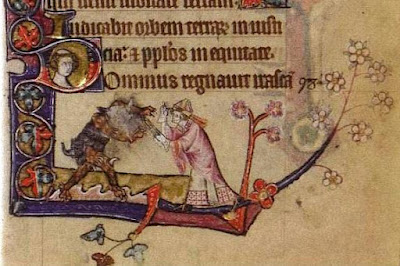 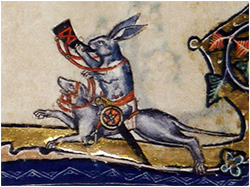 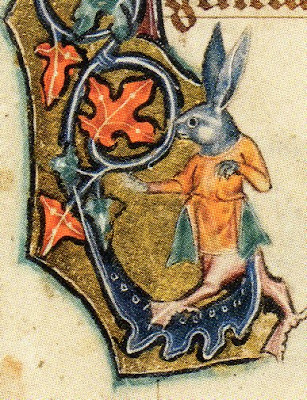 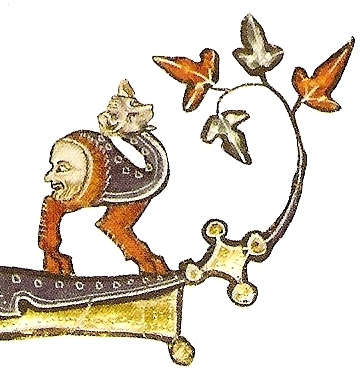 Additional resources, to be explored:

Michelle P. Brown. The World of the Luttrell Psalter, London: The British Library, 2006. Depicting scenes of everyday rustic life with vibrant color and earthy wit, the Luttrell Psalter is a unique and vivid document of British culture in the 1320s. Unlike other illuminated manuscripts, the Luttrell Psalter does not focus only on religious imagery, but instead portrays the domestic dramas of the day. Scenes of farming, archaic medical treatments, music and dance, and even marital friction spill over the psalms and cover the margins of this celebrated book. In The World of the Luttrell Psalter, Michelle Brown unravels the Psalter's history and sets it firmly within medieval society. A crucial element of the Psalter's cultural context is its patron, wealthy landowner Sir Geoffrey Luttrell. Brown reveals that knowledge of Luttrell and the book's audience is as important to understanding the work's meaning as its striking imagery. Brown's engaging narrative traces the inspiration and creation of the book, identifying its forebears while elucidating its originality. With lavish illustrations that highlight the inventiveness of the manuscript, The World of the Luttrell Psalter is an appealing guide to a remarkable artifact.

Morgan, Nigel J. The Douce Apocalypse, Bodleian Library, University of Oxford, 2007. One of the finest of all medieval apocalypse manuscripts, the Douce Apocalypse was part of a series of illuminated texts that brought St. John’s apocalyptic visions to life. Now the manuscript—created sometime between 1250 and 1275—reaches an entirely new audience at the hands of noted scholar Nigel Morgan. The Douce Apocalypse explores the manuscript’s royal patronage, looks at its fascinating imagery, and examines its significance in light of contemporary prophecy. The commentary is accompanied by lush, full-color illustrations. As Morgan relates, the Douce Apocalypse is especially enlightening because of its unfinished nature. A few of its images remain incomplete—and such absences give insight into the artist’s painstaking techniques of drawing, gilding, and painting. The second volume in the Treasures from the Bodleian Library series, The Douce Apocalypse will convey both the beauty of the original and the enduring fascination of its contents.

Morgan, Nigel J. Illuminating the End of Time: The Getty Apocalypse Manuscript, J. Paul Getty Museum, 2012. The visionary nature of the Apocalypse—the biblical book of Revelation—along with its detailed descriptions of the end of the world have long made it ideal for illustration. Illuminated texts of the Apocalypse were particularly popular in thirteenth-century England, and the copy in the collections of the J. Paul Getty Museum, with its lively narrative miniatures, stands as a testament to the artistic heights achieved during that period. In this richly illustrated book, all eighty-two of the manuscript’s images are reproduced in color for the first time. They are accompanied by a full commentary. A general introduction to the history of thirteenth-century English illustrated Apocalypse manuscripts is followed by a succinct study of the artistic context of the Getty’s manuscript, as well as a consideration of its style and date. The rest of the commentary is devoted to a stylistic and iconographic analysis of the manuscript’s images; there is also a complete translation of the text.

Allan, Tony. The Mythic Bestiary: The Illustrated Guide to the World's Most Fantastical Creatures, 2008. Dragons and firebirds, fairies and orcs: these are just a few of the residents of The Mythic Bestiary. A whole menagerie of make-believe beings from the earth, water, and air inhabit these stunningly written and eye-catching pages, from Japan’s Yukki-onna, a beautiful but deadly spirit who appeared to stranded travelers, to the two-headed venomous snake Amphisbaena, which hailed from the imagination of the Greek poet Nicander. Many are hybrids such as the Quetzalcoatl, the Aztecs’ gorgeous combination of serpent and bird; others, more monstrous, tested the mettle of ancient heroes. A few, like the gigantic winged lion, lammasu served as guardian angels, warding against evil spirits. This guide gives not only a taxonomy of size, appearance, habitat, and powers, but also provides vivid descriptions of the cultures that produced them.

Whitlatch, Terryl. Animals Real and Imagined: Fantasy of What Is and What Might Be, Design Studio Press, 2010. A fantastic visual voyage into the world of animals, both real and imagined. There is no end to the diverse and unique creatures that Terryl Whitlatch creates for us with her solid knowledge of anatomy and boundless imagination. Especially intriguing are the 100s of anatomical notes that are dispersed among her sketches, educating and enlightening us to the foundation of living bodies and their mechanics.

Rosen, Brenda. The Mythical Creatures Bible: Legendary Beings, 2009. Fabulous animals, specters from the shadow world, nature spirits, and sacred beings: these are the monstrous, marvelous, and mythic creatures that have come down to us in folklore and legend. Some probably have their origins in reality; others spring completely from the imagination—and they are all here, in this stunningly illustrated bible. It’s rich in history and images, and international in scope, covering dragons and serpents; weird insects like the Aztec Itzpapalotl; zombies, golems, and banshees; the watery Undine; the Monkey King, Sun Wukong, and more.

Moorey, Teresa. The Fairy Bible, 2008. Fairies of the water, air, and earth, the trees and flowers, the house and hearth: all these mysterious, elusive creatures materialize on the pages of this distinctively beautiful guide to fairyland. Illustrated throughout with captivating artwork in glorious color, it examines fairy legend and lore through the ages and leads us into fairy cities, landscapes, rings, and paths. Find out what clothes they wear (fairies can be fussy about their dress), what they like to eat and drink, and what plants and animals they cherish. Discover the secrets of fairy festivals, and the various names they like to be called—including the Little Folk and Good Neighbors. Altogether, it’s a privileged glimpse into a paradise that vibrates at a different frequency than ours… and that few can ever see.

Merian, Matthäus, the Younger. Real and Fanciful Animals from Seventeenth-Century Engravings, Dover, 1998. Unusual and imaginative illustrations, carefully arranged into 4 major divisions —quadrupeds, birds, fishes, and insects— include realistic and fanciful depictions of virtually every real animal, plus such fantasy creatures as unicorns, dragons and basilisks.