The Grotesque in Twentieth-Century Art 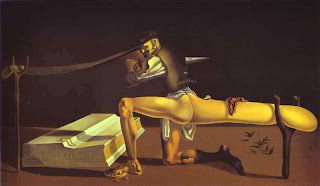 Dali [...] held claim to the fact that his works came to him through his dreams and trance-like states. In The Enigma of William Tell (1933), several psychological aspects are at work; first, it is suggested that the painting represents Dali’s resistance against his father’s authority by showing a man who is kneeling, holding a small child, "William Tell" being the father. The severe elongation of the right buttock is seen as phallic while cannibalistic imagery is seen where instead of having an apple on the baby’s head (Dali’s head), there is a raw cutlet. However popular, fashionable, and influential Dali would become, these traits still did not prevent the artist from being cast out of the movement during the 1940’s.
Producing paintings with his blunt, matter-of-fact style, Rene Magritte was another major figure belonging to the Surrealist movement. In Magritte’s work, we can see the artist taking what we know as the pre-Modernist world and distorting it, reshaping the familiar in order to produce an alien quality. We also gain a sense of Magritte’s hallucinatory images through inconsistent pairings; this can be seen in his painting The Course of Summer [Les marches de l'été] (1938). In the foreground of the painting is a woman’s body from the collarbone down to the beginning of the thighs. The "body" comes to us in two parts: the chest area and the abdomen area clearly belong to two different human beings. The background scene contains the ocean, some mountains, and a blue sky interspersed with billowy clouds and boxes; however, the boxes do not take on a different color, for it is as if they are "box-clouds"; in other words, the boxes and the clouds combine and blend into one another. Magritte also enjoyed doing works which attempted to defy word meanings; for example, in one work, he painted a pipe, the only image on the canvas, and the caption, written in French, read: "This is not a pipe."[4]
A pioneer of several artistic inventions, Max Ernst was celebrated for his sense of the comic, and [...] most associated with [Dada Cologne and] the [more] literary Surrealist movement;[5] many of his paintings were accompanied with poems, often [...] children’s rhymes. In The Elephant Celebes (1921), he combines several inanimate objects in order to create a quasi-mechanic creature. His comic side is revealed as he has painted a tiny, little pencil beneath the elephant which is supposed to serve as some kind of [... support] for the enormous creature.[6] Ernst was also credited with the invention of frottage, a technique where objects such as string or floorboards, for example, are layered in paper, canvas, etc., at times producing works that come out looking like monstrous creatures. Obviously enjoying the combination of different materials to produce works of art, Ernst also extensively used collages to display his creativity. Often, he would take Victorian engravings and woodcuts and set them against images of free association, those that are so closely linked to the Surrealists. 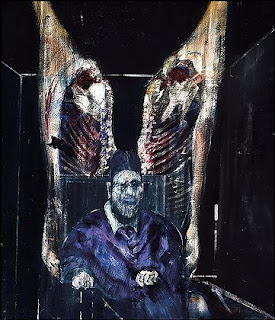 A self-taught artist and also a non-believer, Francis Bacon ironically used Christian iconography in order to produce the masterpiece that would bring him to the forefront of the art world [...], Three Studies for the Base of a Crucifixion (1944). Many view this work as a summation of the primal feelings and emotions caused by the war. Bacon’s Head Surrounded by Sides of Beef (1954) was [...] one of his [most grotesque] paintings [...] based on a picture of Pope Innocent X.[7] [Bacon's] paintings show a sometimes-tortured, always isolated figure who has been blurred with the stroke of a brush in order to suggest human suffering. These particular paintings became images of a decade that was permeated by the threat of the atomic bomb.
Art Brut, or "Art in the Raw," was given its name by Jean Dubuffet, a French artist who believed that art should show that it is socially responsible.[8] Against any smoothness or fine finish that Dali was famous for, Art Brut aimed to take postwar art in a fresh direction. Dubuffet designed works which replicate wall graffiti, taking Surrealism to new extremes; he also used his graffiti-inspired paintings to portray sophisticated friends and intellectuals in a non-sophisticated way, as seen in his painting Generalized Activity No. 14 (1976). Yet another artist who made extensive use of collages, Dubuffet often constructed his collages with materials that seemed inappropriate for the uses he made of them, using materials such as aluminum foil, coal, or even butterfly wings.
Abstract Expressionism also produced several artists who created grotesque works; one in particular and perhaps the most famous was Willem de Kooning. Changing his pre-1950’s style of same "all-overness," de Kooning began to produce works based on women, presenting them as agents of both destruction and creation.[9] Using slashing brushstrokes in order to produce a destructive element, de Kooning’s painting Woman I (1950-1) asks the viewer, "Are women being celebrated, or are they being portrayed misogynistically?" [...]
Always in danger of being over-used, the term "grotesque" cannot be avoided when viewing many twentieth-century works of art. In fact, this essay barely skims the surface of those artists and their works. Many other artists have arguably produced pieces that easily qualify [as grotesque]: Joan Miro, Frida Kahlo, Paul Klee, even [...] Andy Warhol. Looking ahead, the twenty-first century is sure to be marked with art forms which qualify as grotesque.

References (and illustrations added by Mariano Akerman)
1. Alyson Muenzer, "Urinals, Dreams, Graffiti, and Personal Suffering as Art: A Brief Overview of the Grotesque in Twentieth-Century Painting" (Middle Tennessee State University), David Lavery, The Grotesque in Art, http://davidlavery.net/Grotesque/The_Grotesque_In/grotesquepainting.html#Muenzer (2004). See also http://davidlavery.net/Grotesque/.
2. Ewa Kuryluk, Salome and Judas in the Cave of Sex, Evanston, Illinois: Northwestern UP, 1987, pp. 301-7.
3. Muenzer's "Pittura Metafysica" has been replaced here by the original, Italian name of the movement, Pittura Metafisica.
4. Magritte's paradoxical image questions representation (http://en.wikipedia.org/wiki/The_Treachery_of_Images). Representation in turn may well be used as some sort of ideological tool (Ann Marie Baldonado, "Representation," Emory University, Fall 1996, http://english.emory.edu/Bahri/Representation.html).
5. Cologne was under British occupation from 1918 to 1926, essentially just about as long as Dada lasted as a movement. In an atmosphere of strictly imposed order and censorship, Ernst and others protested hierarchy and tradition by exploring the collective subconscious and its incongruous juxtapositions.
6. In a conversation with Penrose, Ernst once noted that the title Celebes was derived from the opening words of a German schoolboys' rhyme, with undeniable sexual connotations:
Der Elefant von Celebes
Hat hinten etwas gelebes
Der Elefant von Sumatra
Der vögelt seine Grossmama
Der Elefant von Indien
Der kann das Loch nicht finden.
(The elephant from Celebes / has sticky, yellow bottom grease / The elephant from Sumatra / always fucks his grandmamma / The elephant from India / can never find the hole ha-ha. William Jeffett, "Max Ernst," in International Dictionary of Art and Artists, ed. James Vinson , Detroit: St. James Press, 1990, vol. 2, pp. 864–65).
7. Bacon appropiated Velázquez's Portrait of Pope Innocent X (1650), but in his 1954 version, "animal carcasses hang at the pope's back, creating a raw and disturbing Crucifixion-like composition. The pope's hands, elegant and poised in Velázquez's version, are rough hewn and gripping the church's seat of authority in apparent terror. His mouth is held in a scream [or a grin] and black striations drip down from the pope's nose to his neck. It's as if Bacon picked up a wide house painting brush and brutishly dragged it over the face. The fresh meat recalls the lavish arrangements of fruits, meats and confections in 17th-century vanitas paintings, which usually carried subtle moralizing messages about the impermanence of life and the spiritual dangers of sensual pleasures. Sometimes, the food itself showed signs of being overripe or spoiled, to make the point. Bacon weds the imagery of salvation, worldly decadence, power and carnal sensuality, and he contrasts those things with his own far more palpable and existential view of damnation" (Marie Louise Schumacher, "Screaming in Paint," Milwaukee Journal Sentinel, 27.1.2007).
8. For a discussion, see Samantha Krukowski, Jean Dubuffet and the Deculturation of Art (thesis), Washington University in St. Louis, 1992, http://www.rasa.net/writings/dubuffet.html
9. Woman I has been "influenced by images ranging from Paleolithic fertility fetishes to American billboards, and the attributes of this particular figure seem to range from the vengeful power of the goddess to the hollow seductiveness of the calendar pinup. Reversing traditional female representations, which he summarized as "the idol, the Venus, the nude," de Kooning paints a woman with gigantic eyes, massive breasts, and a toothy grin. Her body is outlined in thick and thin black lines, which continue in loops and streaks and drips, taking on an independent life of their own. Abrupt, angular strokes of orange, blue, yellow, and green pile up in multiple directions as layers of color are applied, scraped away, and restored" (New York, The Museum of Modern Art, MoMA Highlights, 1999, revised 2004).