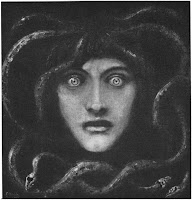 Hybrid Forms. What is a hybrid? A hybrid means something of mixed origin or composition that adds variety or complexity to a system. In science, a hybrid is the offspring of genetically dissimilar plants or animals, especially produced by breeding or grafting different varieties or species. In language, a hybrid word is one whose elements are derived from different languages. In an automobile, a hybrid combines an electric motor with a gasoline engine. Given these definitions of the word hybrid, what would it mean to make a hybrid art form? In art forms, hybridity could mean the blurring of traditional distinct boundaries between artistic media such as painting, sculpture, film, performance, architecture, and dance. It also can mean cross-breeding art-making with other disciplines, such as natural and physical science, industry, technology, literature, popular culture, or philosophy. Hybrid art forms expand the possibilities for experimentation and innovation in contemporary art. Today’s artists are free to make art with whatever material or technique they can imagine. This freedom creates new opportunities to express ideas and concepts. It also opens up a number of challenges, choices, and decisions for artists: Should I work to master a traditional art form or should I work to create innovative new art forms? Or should I do both? Should I experiment with materials that are industrial or outside the scope of my studio if those materials seem to be the best way to express my artistic goals? How can I define myself as an artist if I am shifting, combining, and recombining techniques from inside and outside the worlds of art?Blurring boundaries, breaking rules, and creating hybrids occupies much artistic work today. However, making meaning in art—whatever tools, materials, or techniques are used—remains central to artistic practice. It is important for viewers to keep this in mind as they explore innovative art today. Why is it better to have variety and complexity in art? or life? Why is it good to experiment? What is the difference between the world of art and real life? [1] 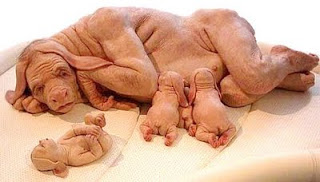 Holy Hybridity! - Patricia Piccinini was born in Sierra Leone and lives in Australia. Her work encompasses sculpture, photography, video and drawing. Her practice explores the intersection between nature and the artificial as it appears in contemporary culture and ideas. Her hybrid animals and vehicular creatures question what it means to be human, wondering at our relationships with--and responsibilities towards--that which we create.[2] Suggestive as they are, her artworks may simultaneously conjure up bestiality and feminist concerns.[3] A case in point is We Are Family (2003), a masterpiece featuring human-dog hybrids and celebrating motherhood. 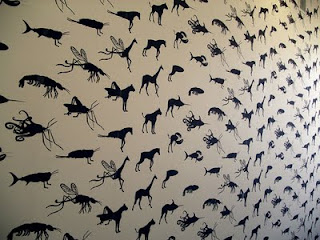 Matt and Sophie Nice's Hybrid Collection Wallpaper (London, 2007) results from the use of various graphic motifs and the multiple combinations they engender.[4]

Mandee Gage's work has consists of objects made in clay and mixed media. Egglike forms are used as metaphors of blank canvases and the human form is worked through casting. Some of the pieces are reminiscent of fairy tales, but with some sinister twist. An interest in human development in relation to environment has shaped much of the work.[5] Such is the case of New Order, a piece exhibited in the UK in 2008, which at once suggests a calm Hindu divinity and a disquieting human aberration.[6]

References
1. "Hybrid Art Forms," Art Today, Walker Art Center, Minneapolis, http://schools.walkerart.org/arttoday/index.wac?id=2355
2. "Patricia Piccinini," Brooklyn Museum Online, New York (1.11.2009). Ill. The Young Family, from We Are Family, exhibition 2003.
3. Artist's statement: "'Feminist' is not the first idea that I would choose to describe myself, however, if asked then the only answer would be 'of course' – I mean, what is the alternative? [...] I don’t really know what 'feminism' means at this point. It seems both too obvious and also not specific enough. When I think about it, I realise how lucky I am that [...] I live in a world where there are so many different feminisms and where my work can be implicitly feminist without being solely about 'women’s issues'" (ibid.).
4. "The Hybrid collection plays with the concept of wallpaper. It allows for a number of unique patterns to be created, using one or a combination of the four designs that make up the collection" (Nice). Ill. after Lux, "Hybrid Collection," Today and Tomorrow, 2.1.2007
5. Gage's website, http://www.mandeegage.co.uk/ (1.11.2009). See also Tactile. Ill. New Order (Cardiff, Tactile Bosch Studios, An-aesthetic Exhibition: Hybrid, May 2008).

6. The multiple arms and bluish appearance of the figure recall those of chief Hindu deities like Vishnu (the sustainer and protector of worlds). The Puranas (4th century CE) describe Vishnu as four-armed and having the divine color of clouds (dark-blue), while reminding us that he is "beyond the ordinary limits of human sense perception" ("Lord Vishnu," Sreeayyappaswami, 6.11.2999). A unity of opposites involving conflicting attributes and incompatible aspects (such as being destroyer and benefactor at once), Shiva is a god of ambiguity and paradox (An Introduction to Hinduism, ed. Gavin Flood, Cambridge: Cambridge UP, 1996, p. 150). Both gods belong to the Trimurti, a concept in Hinduism according to which the cosmic functions of creation, maintenance, and destruction are personified by the forms of Brahma the creator, Vishnu the maintainer or preserver, and Shiva the destroyer or transformer. These three deities form the Great Trinity of Hinduism.