The Gigantomachia, "struggle between gods and giants," is an episode of Greek mythology, which tells of the rebellion of the giants against the gods, and the battle in which the gods defeated them.

Joris Hoefnagel (1542–1601) was a South-Netherlandish painter and engraver. The son of a diamond merchant, he was born in Antwerp. He travelled abroad, making drawings from archaeological subjects. Hoefnagel was a pupil of Hans Bol at Mechlin. He was later patronized by the elector of Bavaria at Munich and by the Emperor Rudolph at Prague. He died at Vienna in 1601.

He is famous for his miniature work, especially on a missal in the imperial library at Vienna; he painted animals and plants to illustrate works on natural history; and his engravings (especially for Ortelius's Theatrum orbis terrarum, 1570 and Braun's Civitates orbis terrarum, 1572) give him an interesting place among early topographical draftsmen.

In 1561-62, Georg Bocskay, imperial secretary to the Holy Roman Emperor Ferdinand I, inscribed the Mira calligraphiae monumenta as a testament to his preeminence among scribes. He assembled a vast selection of contemporary and historical scripts, which nearly thirty years later were further embellished by Joris Hoefnagel, Europe's last great manuscript illuminator. The original manuscript is now in the collection of the J. Paul Getty Museum in Los Angeles, California.

Hoefnagel was commissioned by Rudolf II to illustrate Mira calligraphiae monumenta (The Model Book of Calligraphy), which he began around 1590, more than 15 years after the death of the Croatian calligrapher, Georg Bocskay.[1] In the work, Hoefnagel's illuminations show the spread of interest in botany and zoology at the end of the sixteenth century. His imagery encompasses plants, flowers and fruits, insects and small animals, and even some imaginary beings too.


By mid-sixteenth century, the grotesque had established itself at Flanders, where, "in 1555, an artist called Cornelis Floris designed 18 sheets with human faces made up from vegetal elements, some highly stylized, others still recognizable as leaves and fruits," which were engraved by Frans Huys in Antwerp. [...] The grotesque came to be applied to all manner of decorative arts: ceramics, tapestry, embroidery, furniture-making, jewellery, and so on. Its later, more exaggerated variant found its way back into manuscript-decoration too, notably in the illuminated alphabet in Joris Hoefnagel's Mira calligraphiæ monumenta.[3]


"In the 1500s, as printing became the most common method of producing books, intellectuals increasingly valued the inventiveness of scribes and the aesthetic qualities of writing. From 1561 to 1562, Georg Bocskay, the Croatian-born court secretary to the Holy Roman Emperor Ferdinand I, created this Model Book of Calligraphy in Vienna to demonstrate his technical mastery of the immense range of writing styles known to him.
About thirty years later, Emperor Rudolph II, Ferdinand's grandson, commissioned Joris Hoefnagel to illuminate Bocskay's model book. Hoefnagel added fruit, flowers, and insects to nearly every page, composing them so as to enhance the unity and balance of the page's design. It was one of the most unusual collaborations between scribe and painter in the history of manuscript illumination.
Because of Hoefnagel's interest in painting objects of nature, his detailed images complement Rudolph II's celebrated Kunstkammer, a cabinet of curiosities that contained bones, shells, fossils, and other natural specimens. Hoefnagel's careful images of nature also influenced the development of Netherlandish still life painting.
In addition to his fruit and flower illuminations, Hoefnagel added to the Model Book a section on constructing the letters of the alphabet in upper- and lowercase."[4]


Notes
1. Lee Hendrix and Thea Vignau-Wilberg, Nature Illuminated: Flora and Fauna from the Court of the Emperor Rudolf II, 1997
2. A Green Man is a sculpture, drawing, or other representation of a face surrounded by or made from leaves. Branches or vines may sprout from the nose, mouth, nostrils or other parts of the face and these shoots may bear flowers or fruit. Commonly used as a decorative architectural ornament, Green Men are frequently found on carvings in ecclesiastical and secular buildings.
3. Misteraitch, Faces of the Grotesque, Giornale Nuovo, UK and Sweden, 10.06.2006
4. The J. Paul Getty Museum, Los Angeles, USA, accessed 21.03.2013
Addendum 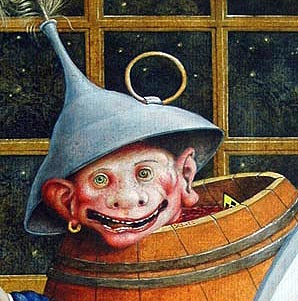 Inspired by the visual imagery of François Desprez's Songes drolatiques de Pantagruel (Paris, 1565), Fabrizio Riccardi painted some 70 pictures (Torino, 2008-11) recreating some of the most bizarre characters ever conceived in France.

Riccardi's accurate and colorful rendering of the Renaissance characters refreshes our understanding of the original 120 woodcuts satirizing the Papal court of Julius II (Il Papa Terribile) and dating from nearly half a millennium ago.

Of course, all the characters depicted by both Desprez and Riccardi have their ultimate source of inspiration in the literary oeuvre of François Rabelais (Gargantua and Pantagruel, 5 vols., written between 1530 and 1564).

If you visit Les Bibliothèques Virtuelles Humanistes and explore the online version of Desprez's volume preserved in the Bibliothèque Municipale de Tours (France), you will discover that all characters have been considered as individual designs, so each of them presents an exclusive number (inscribed in Arabic numerals; top corner of each folio).

In his series of paintings, Riccardi follows the Tours enumeration and he does so consistently. Indeed, some of Riccardi's paintings are not only numbered but also in perfect harmony with the numerals of Desprez's book in Tours. Yet, in his pictures and their titles, Riccardi changes the Arabic numerals of the Tours volume into Roman numerals (e.g., XVIII). The painter signs with the initial "R" (standing for Riccardi), a gesture that recalls the way many Renaissance artists used to sign their paintings and engravings (e.g., "XXXIX R").

Artwork Correlation: Riccardi meets Desprez. My personal research leads me to examine the grotesqueness of Les songes drolatiques. The Grotesque prevails in at least 23 visual cases, each presented here as a matched pair. Original enumeration is kept.

Songe drolatique. The title of Rabelais' book includes an adjective (drolatique) which seems to appear here for the first time in French. Drôle means "funny, curious", and this is the origin of the term drôlerie used by modern art history for the ornamental fantasies on the borders of medieval manuscripts or architectural decorations. Drôlerie is thus related to grottesco, yet they are distinguished by the ancient origins of the latter as contrasted to the medieval roots of the former. In late 16th-century France the meaning of drôlerie also included those satyrical – and often grotesque – figures which since the beginning of the wars of religion flooded the press, as well as the animal-shaped masks and costumes. Its ethymological origin, the Dutch drol (trol; troll; kabouter; gnome) carries in itself the ambivalence of a being which on the one hand is funny and simple, while on the other hand murky, tangled and even with a shade of malignancy.

Such incongruous figures were not born from nothing: they were rooted in a burlesque and satiric tradition, in the metamorphosis of the carnival, the transgressive visions of madness. They had been present in medieval architecture, the carvings of stalls and capitals, between the ornaments of tapestries, and of course on the borders of manuscripts, the drôleries. All these sources offered to the avid eyes of the artist a feast of images, where the figurative and the ornamental, intertwining each other, created a multitude of unusual, whimsical or shocking forms.


"Drolatic" is an adjective of "dream" in the title, and we must ask what kind of dream is this. It is pressumably the dream of reason, which gives birth to monsters. There is nothing derogatory in the use of "dream" in the title, nothing that would diminish the seriousness of the artistic purpose. On the contrary, this dream reveals us a reality which is hidden by daytime appearances, and which escapes the constraints of socially correct discourse, language and logic. The dream of reason offers us a glimpse into the continuous flow of the unexpected associations between the objects and the elements of the language, into a deeper layer of reality which makes more complete our understanding of the world (Studiolum).