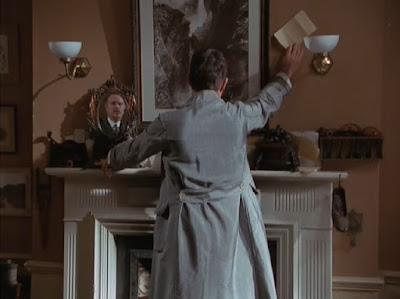 "I suppose, Watson, we must look upon you as a man of letters," said he. "How do you define the word 'grotesque'?"
"Strange--remarkable," I suggested.
He shook his head at my definition.
"There is surely something more than that," said he; "some underlying suggestion of the tragic and the terrible. If you cast your mind back to some of those narratives with which you have been afflicted a long-suffering public, you will recognize how often the grotesque has deepened into the criminal. Think of that little affair of the red-haired men. That was grotesque enough in the outset, and yet it ended in a desperate attempt at robbery. Or, again, there was that most grotesque affair of the five orange pips, which led straight to a murderous conspiracy. The word puts me on the alert."
"Have you it there?" I asked.
He read the telegram aloud.
"Have just had most incredible and grotesque experience. May I consult you? - Scott Eccles, Post-Office, Charing Cross."

Doyle, The Hound of the Baskervilles, 1901, Chapter 15: A Retrospection

The more outré and grotesque an incident is the more carefully it deserves to be examined, and the very point which appears to complicate a case is, when duly considered and scientifically handled, the one which is most likely to elucidate it.


Doyle Encyclopedia: The Hound of the Baskervilles
No comments:


James Abbot McNeill Whistler. […] Wit, dandy and aesthete, he provoked outrage and astonishment in […] Victorian art and society. […] His musical titles – Symphony, Arrangement and later the famous Nocturnes – stress his notion of the harmonics of tone, colour and line – the equivalent of a kind of mood music. […] In spite of his emphasis […] on purely formal values, and elsewhere in his work on instantaneity, Whistler was never really at one with Impressionist theory or practice: he was essentially subjective rather than objectively descriptive. […] His confrontation with established British art and the public came to a climax in 1876 with the exhibition in London of Nocturne in Black and Gold: Falling Rocket. Painted about 1874, it is a lyrical exclamation of delight at the effect of fireworks, raining coloured fire through the night at a display in a London pleasure garden. The English critic John Ruskin was revolted by it, for reasons that are not entirely clear. […] Ruskin in a famous article denounced Whistler for flinging “a pot of paint … in the public’s face”. [… Yet, Whistler] was a pioneer in simplification, sweeping out Victorian clutter, using clear and plain colours. | In Whistler’s words, “The masterpiece should appear as the flower to the painter … with no reason to explain its presence – a joy to the artist.” Aestheticism had no room for art expressing the goodness of Nature, as Ruskin saw it (David Piper, The Illustrated History of Art, London: Bounty Books, 2004, pp. 344-45).

It was the lack of interest in the subject matter, the freedom of the handling of paint, and the lack of 'realistic' description that enraged Ruskin; Whistler's evidently rapid method of painting also conflicted with the Victorian ideal of hard and painstaking work (Norman Reid, The Tate Gallery: An Illustrated Companion, London: Tate Gallery, 1979, p. 62).


"To clothe the idea in perceptible form," proposed the poet Jean Moreas in his 1886 "Manifesto of Symbolism". It was in France and Belgium, the cradles of literary Symbolism, that Symbolist painting was born. It plunged headlong into the cultural space opened up by the poetry of Baudelaire and Mallarmé and by the operas of Wagner. Symbolist painters sought not to represent appearances but to express "the Idea," and the imaginary therefore plays an important part in their work. "Dream" was their credo; they execrated, with a fanatical hatred, impressionism, realism, naturalism, and the scientistic. The main principle of Symbolism, that of "correspondences," was to attain harmony between all the different arts, or even to realise the total work of art (Gesamtkunstwerk) that Wagner had dreamt of creating. What we rediscover today, after a period of neglect, is this: Symbolist painting is essential to our understanding of modern art, not only because it spread across the world like wildfire, creating disciples from Russia to the United States, from Northern Europe to the Mediterranean, but because it was the source of a series of mutations without which modern art would not be what it is (Michael Gibson, Symbolism, 1997).


Artistically ambitious was 'England's Michelangelo', George Frederic Watts. […] His most famous painting, Hope, which has been almost always on public exhibition since Watts himself presented to the Tate [Gallery] in 1897, reveals an aspect of his work other than the grandeur of Renaissance art, an aspect modern critics have compared with the Symbolism of his contemporaries in France and Belgium. The emotional intensity and self-conscious meaningfulness of Hope certainly go beyond the range of the academic grand manner (Norman Reid, The Tate Gallery: An Illustrated Companion, London: Tate Gallery, 1979, p. 60).


First used in reference to literature, the term symbolism appear no latter than 1886, when the writer Jean-Moréas published a Symbolist manifesto in Le Figaro littéraire. Moréas identified a new sensibility in music and literature that rejected the everyday, contemporary world explored by Realism in favor of timeless reveries and myths. The critic Georges Albert Aurier applied this perspective to the visual arts in an article in the Mercure de France of March 1891, in which he identified Paul Gauguin as the pioneer Symbolist. Although other terms such as Synthetism, Cloisonism, and Nabis were already in use, the more embracing Symbolism has become a blanket term for such subjective, anti-Realist tendencies in art and literature at the end of the nineteenth century.
Symbolism is more an approach or attitude than a recognizable style. It is grounded in the Romantic tradition of the early nineteenth century and shares with that sensibility an interest in the exotic, the "primitive," and the otherworldly. […] The titles of haunting Symbolist allegories by the painters Edvard Munch and Gauguin—The Dance of Life (1900) and Where Do We Come From? What Are We? Where are We Going? (1897), respectively—communicate the introspective mind-set of […] many artists of the day.
Symbolism's emphasis on interior states was a reaction against the philosophical positivism, rapid industrialization, and increasing secularism of the nineteenth century. Nontraditional forms of spiritualism proliferated. The metaphysical Rosicrucian fraternity of Paris, for instance, staged annual saloons between 1892 and 1897 that showcased the most subjective Symbolist art, such as Fernand Khnopff's I Lock the Door upon Myself (1891) […].
The role of dreams was also central to Symbolism. Although Sigmund Freud had begun his pioneering exploration of the unconscious by the 1890s, his work was not widely known at the turn of the century (Robert Atkins, Art Spoke, New York: Abbeville, 1993, pp. 205-6).


The phrase l'art pour l'art (Fr. "art for art's sake") was coined by French philosopher Victor Cousin in 1818. It referred to the belief that art need to serve no moral or social purpose, or—as […] Whistler put it later in the century—that art "should stand alone and appeal to the artistic sense of eye and ear without confounding this with emotions entirely foreign to it, as devotion, pity, love, patriotism and the like." […] Art for art's sake ultimately derives from the eighteenth-century German philosopher Immanuel Kant, whose conviction that art was to be judged by its own standards was taken up by such French critics of the mid-nineteenth century as Théophile Gautier. The most complete expression of the attitude is the Symbolist artist's withdrawal from the world in pursuit of a subjective, even mystical, vision. The Nabi artist Maurice Denis's dictum that "a picture—before being a war horse, a female nude, or some anecdote—is essentially a flat surface covered with colors assembled in a particular order" translated that subjectivity into formal terms. [… An] exaggerated cult of beauty and aestheticism […] sprang up in London during the last quarter of the nineteenth century […; such] attitude was known as Aestheticism, and its exemplars were sometimes referred to as Aesthetics or even Decadents (Robert Atkins, Art Spoke, New York: Abbeville, 1993, p. 62).


Art Nouveau. S. Bing's shop L'Art Nouveau […], which opened in Paris in 1895, is the source of the name for this distinctive style of late-nineteenth century architecture, design, and art. The style itself, however, originated more than a decade earlier, and by the end of the century it boasted a multitude of names. […] Art Nouveau works are characterized by the use of organic imagery, emphasis on sinuous line, and union of ornament and structure. […] Art Nouveau's radical accomplishment was its rejection of Academic revivalism that dominated nineteenth-century art and design. Its sources are nonetheless eclectic: elements from the slightly earlier British Arts and Crafts movement, Symbolism, and Japonisme were seasoned with dashes of the past dating back to ancient Egypt and eighteenth-century rococo. An erotic undercurrent is also common. […]
Art Nouveau is a term usually applied only to design and architecture, but it is impossible to understand art by Aubrey Beardsley, Paul Gauguin, Gustav Klimt, Edvard Munch, and Henri de Toulouse-Lautrec, among many others, without taking it into account (Robert Atkins, Art Spoke, New York: Abbeville, 1993, pp. 63-64).


The concept of the dandy emerged in London during the first quarter of the nineteenth century. […] It soon became associated not just with dress and manners but with a system of values that prized artificiality, self-consciousness, and disdain for bourgeois properties––expressed through satirical wit, intellectual skepticism, and a withdrawal from conventional politics. Dandyism both rejected the traditional idea that art imitates nature and the […] charitable preoccupations of the Victorian era. Its emphasis on amorality, play, and art offered an escape from the social problems caused by the squalid new world of industrialism. [… In] mid-nineteenth century […], the term dandy became linked with the idea of art for art's sake. The height of dandyism in art occurred at the end of the nineteenth century, when some artists and writers began to see themselves as a virtual extension of their art […]. Detachment, irony, and artifice characterized their efforts. The mannered poses and brittle wit of the circle surrounding the writer Oscar Wilde and the artist Aubrey Beardsley in London constitute [an] example [… of this]. | Dandyism is an attitude rather than a style. […] Dandyism's legacy in modern art was a sense of often-narcissistic playfulness that challenged the traditional understanding of art making as an invariably serious endeavor (Robert Atkins, Art Spoke, New York: Abbeville, 1993, pp. 90-91).