What if a Painter, in his art to shine,
A human head and horse's neck should join;
From various creatures put the limbs together,
Cover'd with plumes, from ev'ry bird a feather;
And in a filthy tail the figure drop,
A fish at bottom, a fair maid at top:
Viewing a picture of this strange condition,
Would you not laugh at such an exhibition?
Trust me, my Pisos, wild as this may seem,
The volume such, where, like a sick-man's dream,
Extravagant conceits throughout prevail,
Gross and fantastick, neither head nor tail.
"Poets and Painters ever were allow'd
Some daring flight above the vulgar croud."
True: we indulge them in that daring flight,
And challenge in our turn, an equal right:
But not the soft and savage to combine,
Serpents to doves, to tigers lambkins join. 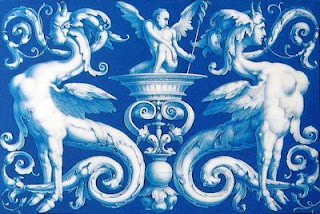 Imagine a painter chooses to attach a horse's neck to a human head, adding feathers of various colors to a mdley of limbs, so that a woman beautiful above the waist tailed into a revolting dark fish. Could you hold back your laughter, my friends, if admitted to view it? Believe me, Pisos, a book could be very like such a picture, its images just empty inventions like a sick man's dreams: neither foot nor head would be rendered in a single form.—"Painters and poets alike have always had an equal prerogative to dare anything," you say?—We know. This is a concession we both ask for and grant the same license. But not so far as to unite the mild with the savage, or to couple snakes with birds, and lambs with tigers. 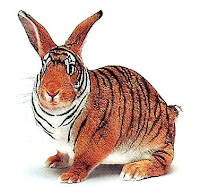 Snakes with Birds, Tigers with Rabbits, and Men with Flowers...